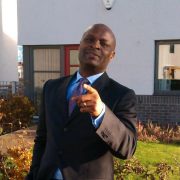 Pastor Edmund is a Pastor; Missionary and Church Planter. He is a graduate of English and Literary Studies. After his first degree, he went into business for himself. A very successful Entrepreneur, he gave up a thriving business in Spain when he was called by God into full time ministry in 2005.

Prior to his call, Edmund was the Executive Church Administrator for The Redeemed Christian Church of God in Spain with headquarters then in Malaga. He was in this position from late 2003 until 2006 when he relocated with his family to Edinburgh. Upon arrival in Edinburgh, he was instrumental to the planting of the Potter’s House Parish in the south of Edinburgh in 2007.

He spent two years at the Faith Mission Bible College where he obtained a diploma in Theology and Expository Preaching. He has also taken several theological/missionary training over the last couple of years. During his time at the College, Pastor Edmund was involved in several missionary endeavours organised by the College. These several endeavours took him across several cities and villages in Scotland teaching and proclaiming the Word of God in several of their churches.

In June 2014, Pastor Edmund and his family moved to Glasgow and joined the team of ministers at The Redeemed Christian Church of God Beautiful Gate Parish, Glasgow. They were in Beautiful Gate until September 2015 when he was again sent to help reorganise the parish in Paisley. In the course of the reorganisation, the Regional Church leadership decided he should continue the work in Paisley as the new Parish Pastor

Pastor Edmund is an avid reader and a strong believer in the preservation of family and positive social values in all communities. His greatest desire is to see families in every community surrendering to the Lordship of Jesus Christ.

He is married to Pastor Ethelrida and they have a Son.

“Good deeds alone will not get you any eternal reward; however, good deeds that have God at the very centre will guarantee you eternal reward in this world and in the world to come”